Even Stem Cells Can Have An Identity Crisis: Here’s How Scientists Track It

The Context: All of the cells in our body perform different functions: red blood cells carry oxygen, pancreas cells produce insulin, liver cells break down fat, and so on. Before these cells are assigned their job, they start out as stem cells, capable of becoming any cell type in the body. The goal of stem cell therapies is to turn stem cells into healthy, specialized cells that can help correct or restore a certain function in the body, but making sure every single specialized cell made from stem cells is assuming its desired identity is one of the biggest challenges facing researchers.

The Study: A team from Washington University in St. Louis led by NYSCF – Robertson Stem Cell Investigator Samantha Morris, PhD, has devised a new computational tool called Capybara that identifies with unprecedented precision how individual stem cells in a large pool transition through various identities en route to their target role. The study appears on the cover of Cell Stem Cell.

The Importance: This new tool will help scientists optimize their methods for turning stem cells into specialized cells, and will help ensure that every single cell put into a patient’s body as part of a stem cell therapy is doing the job it is supposed to do.

Many diseases are caused by specific cells that die or malfunction. Type 1 diabetes, for example, results when the body’s immune system erroneously attacks beta cells in the pancreas, impairing a patient’s ability to create insulin. With regenerative medicine, scientists can use stem cells to create healthy versions of the cells damaged or dying in a disease, and then deliver them to a patient to restore function.

The challenge, however, is making sure that when researchers turn stem cells into new, healthy versions of a certain cell type for transplantation, that all of the cells have successfully assumed their new identity and will be able to do their new job once they reach a patient. This conversion process, known as differentiation, is done on millions of cells at a time, so it’s important to ensure that all of these cells are functioning as they should to be used in a therapy.

A New Tool for Tracking the Evolving Identity of Cells 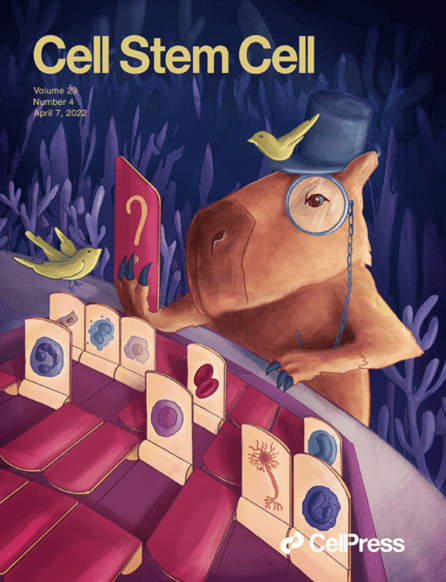 Dr. Morris’ team sought to create a way to follow a cell as it becomes a specific cell type, precisely tracking where it is in the maturation process and whether it is progressing toward becoming a functional cell or if it is going astray. The team based their approach on single-cell RNA sequencing data, which quantifies the level at which every gene in the genome is expressed in individual cells.

Their new tool, called Capybara – named for the large, river-dwelling rodent (which one of the team’s collaborators had as a pet growing up — surprisingly, they named the method before realizing this) is now the only method capable of analyzing cells at this level of detail, pinpointing exactly where a cell falls on a continuum from ‘stem cell’ to ‘specialized cell.’

Putting Capybara to the Test

The team tested their tool on tracking stem cells as they turned into blood cells. Capybara successfully identified which cells were progressing toward their desired fate with ease and which were struggling (i.e., showing features of non-target cell types).

They then examined how the tool performed when tracking the development of cells that are in high demand as regenerative therapies: heart cells and spinal cord cells. Capybara again performed as they had hoped, identifying how cells were maturing, revealing new ‘hybrid’ cell states, and even highlighting opportunities to improve the way scientists prompt stem cells to become other cell types. For example, the team found that adding retinoic acid could increase the differentiation yield of motor neurons.

Ultimately, the team hopes their tool will help the research community better understand how to successfully assign cells a new identity, in turn ensuring that these cells are functional and safe when delivered to a patient.

The study graces this month’s cover of Cell Stem Cell, and features a capybara that the lab has named ‘Colin.’ Like maturing stem cells, Colin even has a few possible identities of his own (check some of them out below).