COVID-19 vaccines being rolled out around the world are providing a light at the end of the tunnel for the pandemic, yet many questions remain, like what new virus variants mean for vaccine efficacy, and when the vaccines will allow a return to normality. NYSCF – Robertson Stem Cell Investigator Alumnus Deepta Bhattacharya, PhD, an expert immunologist at the University of Arizona who studies antibody responses to vaccines and infections, joins NYSCF CEO & Founder Susan L. Solomon, JD for a fireside conversation to talk about all things COVID-19 vaccines, variants, and immunity. They discuss how the different available vaccines help to immunize us against the COVID-19 virus, how emerging virus variants affect our immunity, and how vaccines will bring an end to this pandemic. 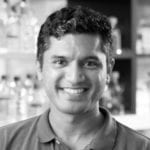 Deepta Bhattacharya is an expert in immunology whose lab studies stem cells and antibody responses to infections and vaccines. He received his PhD from the University of California, Berkeley, studying a type of immune cells known as B cells. For his postdoctoral fellowship, he trained at Stanford University, studying the cell biology of hematopoietic stem cells and the cells they give rise to. In 2008, he began his own lab at Washington University in St. Louis, first as an Assistant Professor and then as a tenured Associate Professor. Dr. Bhattacharya returned in 2017 to his birthplace of Tucson to join the Department of Immunobiology at the University of Arizona. His team has begun using a test that can detect antibodies against the COVID-19 virus in previously infected people, which can be harnessed to develop treatments and vaccines.