Watch the Fireside Chat video and read the summary below.

After a historic research effort, COVID-19 vaccines are already here. Several of these vaccines, including the Pfizer and Moderna vaccines that were the first to receive approval in the United States, employ  mRNA technology to defend against the SARS-CoV-2 virus.

Moderna founder, NYSCF – Robertson Stem Cell Investigator Alumnus, and NYSCF Board Member Derrick Rossi, PhD, recently sat down with NYSCF CEO Susan L. Solomon for a fireside chat to discuss how COVID-19 vaccines work, how the mRNA technology he helped pioneer accelerated their arrival, and what we can expect from these vaccines in the coming months.

How do vaccines work?

The mechanism that makes vaccines work has been in practice for hundreds of years, which fundamentally works by stimulating the human immune response so that it will be ‘primed’ to defend us against certain viral infections.

“The history of vaccination goes back to smallpox,” explained Dr. Rossi. “In 15th century China, they started to do inoculations essentially with pustules. They would take a little bit of scabrous material from somebody who has had the pox put it onto the skin of another person. What they were actually doing was giving a very small, controlled dose of the virus (which was largely inactive) to the skin of that person, and what they found throughout the centuries around the planet is that usually was sufficient to stimulate an immune response, which would then confer resistance to smallpox when it was encountered.”

Scientists later discovered ways to inactivate, or ‘attenuate’ viruses before using them as vaccines, so that the virus would not be capable of infecting cells or causing illness, but would still elicit a protective immune response. This is the approach most widely used in current vaccines, such as the influenza vaccine.

“Fundamentally, a vaccine is exposure of a small amount of something that is expressed by the virus,” continued Dr. Rossi. “It might be an inactivated whole virus, or just a protein.”

Most current COVID-19 vaccines introduce a small part of the SARS-CoV-2 virus called the spike protein (the part of the virus that helps it get into our cells) into the body so that the immune system can train itself to fight it.

“If you imagine my hand is what a virus looks like, my fingers would be the spike proteins,” Dr. Rossi said, showing his open palm with his fingers spread apart. “This is the protein that meets a receptor on the human cell to initiate infection.” 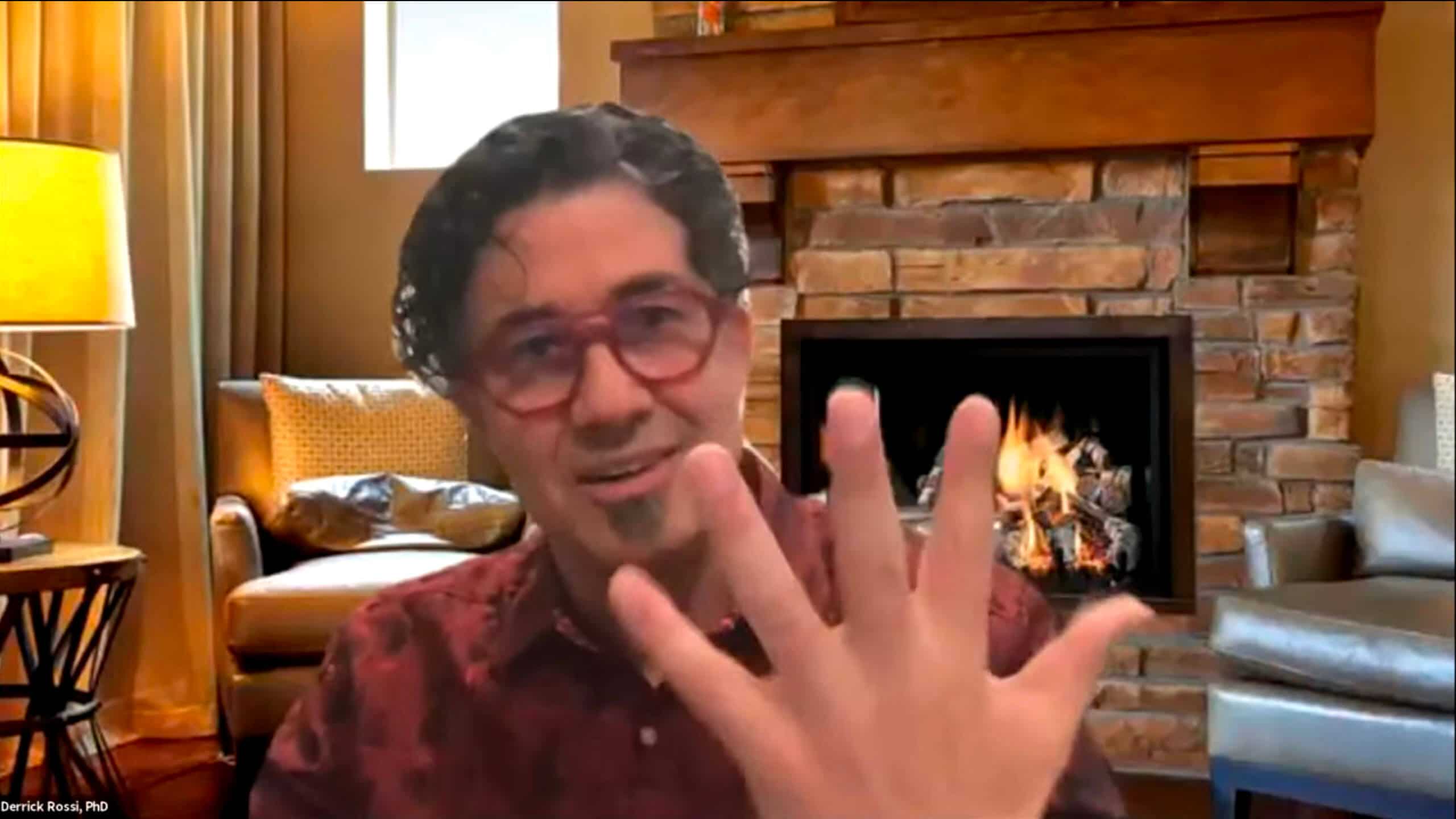 “What COVID-19 vaccines do is expose healthy individuals to a part of the virus – not even the whole virus, just the spike protein – with the purpose of eliciting the immune system in the healthy individual to recognize that protein as foreign and mount an immune response to it to generate neutralizing antibodies,” he continued. “So now when that person goes out and encounters the virus for real at the supermarket or the post office, their immune system has already seen an important part of it, and it is ready to mount an efficient response to prevent illness.”

How do mRNA vaccines work?

mRNA vaccines are a newer way of achieving the same effect of preparing your immune system to fight the virus. Instead of using viral proteins, mRNA vaccines leverage the process your body naturally uses to make proteins, and it all starts with DNA.

“DNA is the hereditary molecule that contains the code for life and lives in a cellular compartment called the nucleus,” explained Dr. Rossi. “But this code has to be read: the instructions are all in there, but you can’t actually do anything with it unless you turn it into something that can actively carry out the functions of cellular life – specifically, if you turn the genes contained on the DNA into proteins.”

That’s where mRNA comes in.

“mRNA is synthesized as a faithful copy of DNA code and then do something DNA can’t do, which is move out of the nucleus to the cytoplasm of a cell, where ribosomes (in essence like little protein production factories) translate the mRNA code into proteins. The newly synthesized proteins then carry out the busy work of the cell, and that’s the basis of all cellular life on planet Earth.”

Each of our cells contain hundreds of thousands of copies of mRNA, and once mRNA is translated into specific proteins, it is broken down and recycled.

“[mRNA] is a transient molecule, unlike DNA, which is very stable,” noted Dr. Rossi. “After mRNA makes it’s journey into the cytoplasm and helps synthesize a protein, it is essentially degraded.”

“The protein that [the vaccine] is encoding is a foreign protein to the human body,” explained Dr. Rossi. “The spike protein is not encoded by your genome. Then our immune system says, ‘Hmm, that protein does not look like one of ours, let us mount an immune response to that.’ And that’s the basis of how the vaccine confers protection against the real virus.”

This approach has proven successful in large-scale clinical trials by Pfizer/BioNTech and Moderna, whose COVID-19 vaccines are both over 94% effective in protecting against the virus. Given both the effectiveness and the speed of producing mRNA vaccines relative to traditional vaccines, this new approach could improve vaccinations for many different viruses, including the flu.

“There are several companies trying to make a yearly influenza vaccine out of mRNA, and to be honest, I think it’s going to be a much better vaccine,” noted Dr. Rossi. “RNA is very easy to synthesize, and you can tailor it exactly to the sequence you are trying to target.”

“The process of making [the flu vaccine] is so long. They start making it before they actually know what the predominant strain of influenza of that particular season is going to be. That’s why some years we get better flu vaccines than other years. Sometimes we envision that the strain that’s coming is closer to what actually comes and sometimes we don’t.”

“So in contrast, if you wait until you know what the predominant flu strain is, you can very quickly synthesize an mRNA vaccine against it, in which case you’re actually going to have an immune response that’s targeted exactly to the strain that happens to be prevalent in any given year.”

How do we know the COVID-19 vaccines are effective?

According to Dr. Rossi, the data says it all. “Certainly the clinical trial data that both Pfizer/BioNTech and Moderna have released suggest extraordinary efficacy,” he remarked.

“This is how we know it’s working,” he said, pulling up a graph from Moderna’s clinical trial report to the FDA. 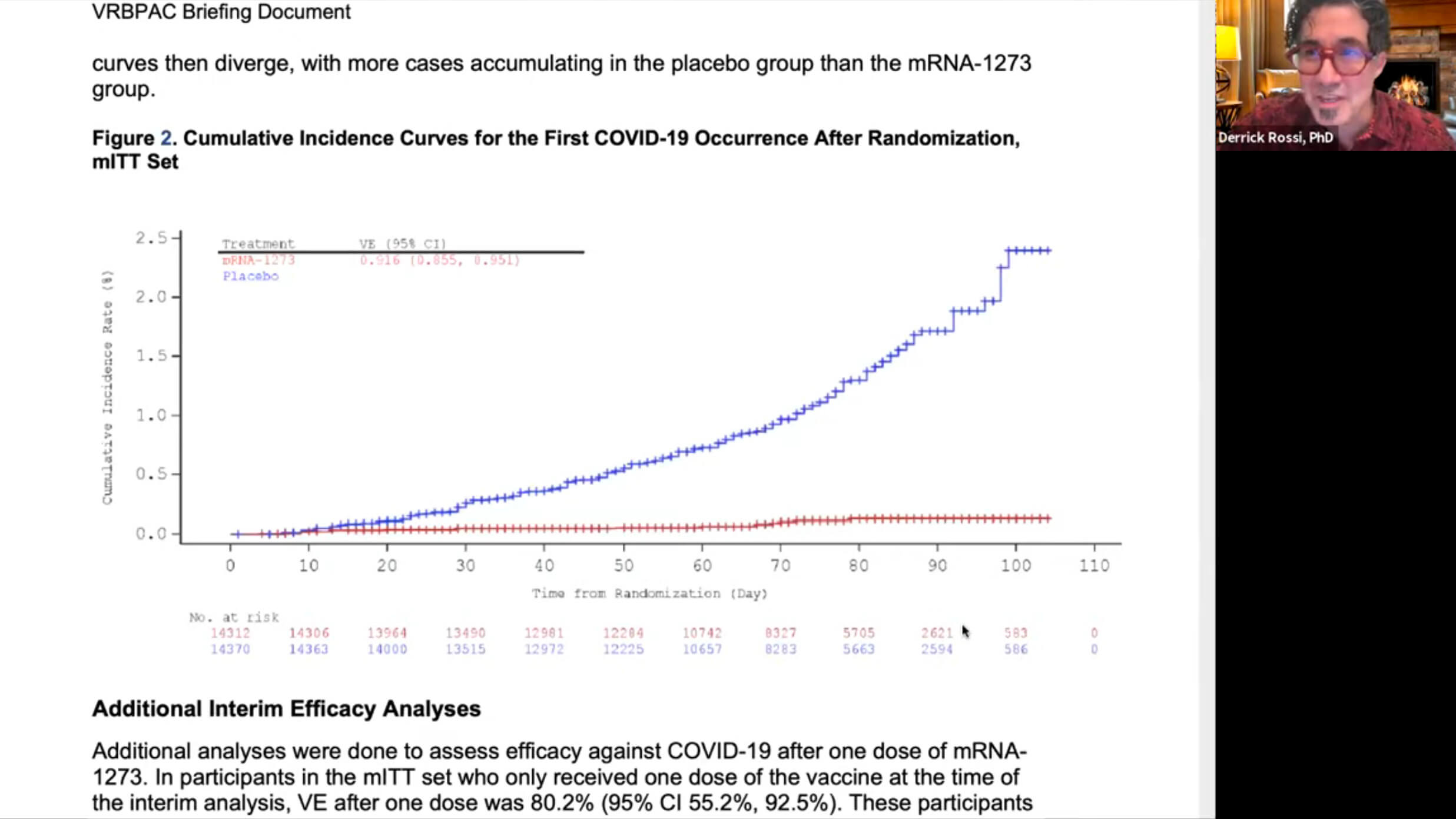 “On the Y axis [the vertical line] is the incidence of infection and on the X axis [the horizontal line] is days post vaccination. So this is about 105 days out from vaccination. What you see is that for the people that got the placebo [the blue line], their rate of infection is ever increasing. In contrast, if you look at the red line, which is people that got the mRNA vaccine, only about 0.1% of that cohort was infected with SARS-CoV-2. So that data couldn’t be more stark.”

Even more encouragingly, all incidences of severe COVID-19 disease (leading to hospitalization or death) were exhibited by people in the placebo group who did not receive the vaccine.

“All of the people that came down with severe COVID-19 were in the placebo group,” notes Dr. Rossi. “Nobody who came down with severe COVID-19 was in the vaccine group. And the one person that passed from COVID-19 was in the placebo group. That type of data and that type of protection for such a deadly disease is really encouraging. And that’s a pretty large clinical trial – 30,000 healthy volunteers.”

The data from Pfizer/BioNTech and Moderna’s clinical trials show upwards of 94% efficacy, which experts agree is remarkable success for a vaccine.

How do we know the COVID-19 vaccines are safe?

Following these clinical trials performed in tens of thousands of healthy volunteers, the Pfizer and Moderna vaccines were deemed by independent expert reviews to have no serious safety concerns. The remarkable speed with which the vaccines were developed reflects the efficiency of mRNA technology and the unprecedented investment in the infrastructure and clinical trial costs that allowed the vaccines to move more quickly through different phases.

In addition, the mechanism that makes the vaccine work is something your body does all the time on its own.

If you get the vaccine and start to feel a little under the weather – it doesn’t mean it’s causing you harm. In fact, it’s a sign that the vaccine is working as it should.

“Headache, fatigue, muscle pain, chills: these are common side effects of even getting your influenza vaccine every year,” said Dr. Rossi. “And really that’s a signal, not of a reaction to the delivery agent itself, but that your immune system is kicking in. It’s a good thing.”

What else could mRNA technology be used for?

When he founded Moderna, Dr. Rossi’s original vision for mRNA technology was using it to replace dysfunctional proteins with healthy ones in patients with various diseases.

“I envisioned that we could introduce a non-mutated copy [of mRNA], make the protein that [the patient] truly needs, and hopefully that would impact their genetic disease.”

mRNA technology thus has the potential to treat a variety of conditions for which current drugs are not effective, including rare diseases, cancer, and heart failure by leveraging this process.

Why should we be hopeful for 2021 and beyond?

2020 has been a long and difficult year, but thanks to the hard work of scientists, healthcare workers, and community members, Ms. Solomon and Dr. Rossi are confident that 2021 will be much brighter.

“I’m so grateful to Derrick and the other scientists in the NYSCF world who are working very collegially on this problem, and we are seeing astonishing, encouraging results,” said Ms. Solomon. “One day, we’ll be back with our friends and loved ones, and we won’t be afraid to visit our elderly relatives or our friends who are immunocompromised. And there’ll be a realization that life is very precious.”

“The vaccines are coming,” added Dr. Rossi. “There’s light at the end of the tunnel. Hopefully mom and pop businesses will be able to return and people will get their jobs back. I’m really hopeful that we’re going to see an end to a lot of the devastation [of 2020] next year.”