With the recent boom of interest in regenerative medicine, researchers will need to scale up their ability to manufacture cells for therapies. New York City has become a hub for this work, with many organizations, including the NYSCF Research Institute, expanding to allow for faster and more efficient cell manufacturing that will lead the way for future groundbreaking treatments.

The panelists noted that New York City is a prime location for cell manufacturing because unlike producing large machinery, the end product (cells) are quite small.

“We’re manufacturing something that’s really tiny,” noted Leslie Mitchell, PhD, of Neochromosome. “We can do that in a small amount of space, so we can serve a large market without expanding into a really big footprint.”

When The NYSCF Research Institute opened, it consisted of 500 square feet in a lab in uptown Manhattan – essentially one small station for scientists to work on projects that couldn’t be carried out anywhere else. In 2017, NYSCF moved its labs to Hell’s Kitchen, where we have expanded and renovated two floors (42k square feet combined) to enable large scale cell manufacturing, public outreach, and even a GMP suite for making clinical grade cells to treat age-related macular degeneration.

“[Moving our headquarters] was a huge logistical project,” Jeff recalled. “We wanted to stay in New York City, as we collaborate with all the major institutions here, and we found this building in Hell’s Kitchen that was a perfect fit.”

“The building was originally used in the 30’s as a movie production facility and had these big 32,000-square-foot floor plates – perfect for manufacturing,” he continued.

This central location allows NYSCF to continue its role as a collaborator and convener for all of New York’s research organizations, and its success has prompted the creation of The Hudson Research Center in the building housing NYSCF’s labs.

“The building was well suited to house the Array, which is central to what we do,” Jeff noted. “We customized a totally raw space to essentially create a building in a building.” 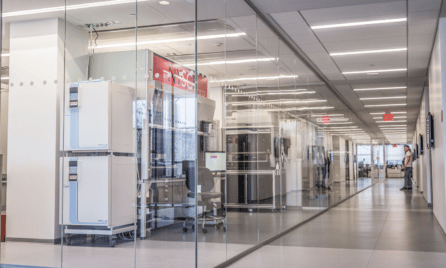 “We always thought it was important to have high quality, standardized, reproducible stem cells to conduct research with, and now with the Array, it’s possible,” he said. “We also distribute these cells around the world and want to continue to provide this service for other labs.”

The Array is an ever-changing entity that is always becoming a better version of itself that integrates the latest in technology: everything from gene editing to artificial intelligence. These capabilities are then shared throughout the research community to enable powerful science.

“The Array has evolved so much even since we’ve been in this building – we built a tracking system from scratch and do a tremendous amount of imaging and QC with the robots. We can turn the stem cells into different cell types. We have a clinical suite now as well, and we will be applying our automation expertise to the creation of clinical-grade cells.”

Thanks to support from the Economic Development Council, NYSCF is also expanding to build out further space for its labs and programs.

“We’ve filled out our space on our main floor, but recently took the rest of the second floor – 23,000-square-feet – and are in planning stages to increase capacity even further,” Jeff said.

Looking to the future, Jeff stressed that NYSCF will keep pushing boundaries to enable powerful science.

“We’ve never been particularly interested in doing what everyone else is doing,” he remarked. “We like to try to think in terms of the future as much as we can, so that’s what we’ll continue to do.”